Then it's going to be all about performance as we move into the benchmarking side of things.

Next up we've got two USB 3. We've got a further two USB 3. The only thing that we wish this board had was two Display Port connectors.

The reason for this is that you can run three independent monitors off Ivy Bridge processors with Intel HD and graphics, but you have to run two of them off DisplayPort connectors. For audio things have been cut down to three due to limited space on the Mini ITX motherboard, you also get an optical out. Above the DVI output you have the two antenna connections for the boards built in wireless N. 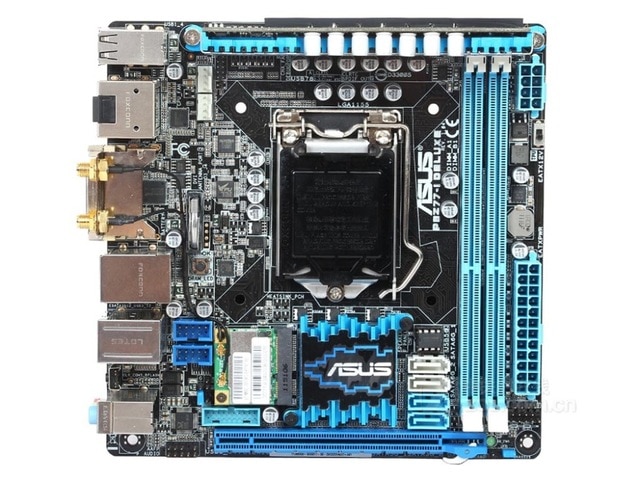 Wiring this board up should make for easy wire management if you can find a case that allows for decent wire management in such a small form factor. Although overclockers have traditionally shied away from Mini-ITX motherboards, Asus hopes they'll give the Deluxe a second look. I certainly did a double-take the first time I saw the board.

The feature that caught my eye was the riser card that sits north of the CPU socket. Arranging the VRMs on a riser is a clever way to get around the form factor's limited board real estate, but it does create some complications.

The back of the riser features a rubber spacer to prevent the card's components and exposed solder points from making contact with the walls of an enclosure. This bumper just barely extends beyond the boundary of the motherboard, so it shouldn't limit case compatibility.

The riser does crowd the area around the fan headers, though.